Since I can't look back with the barrel back chairs, I have no where to go but forward.  Time to start taking off the upholstery piece by piece.

First, you have to peel off the back. 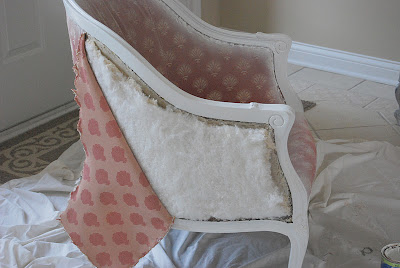 So far, so good.  Once the fabric is off, I took off the cotton batting to check out the back.  If you notice, I set aside the fabric and batting.  The fabric I will use as a template for the new fabric.  I will reuse the batting seeing that it is in good condition. 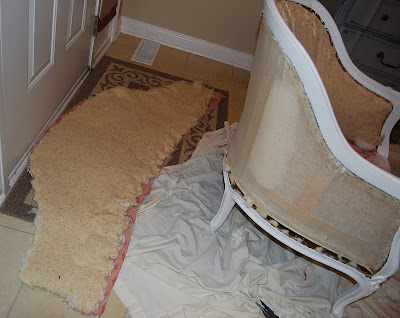 Now I can start tackling the front back of the chair. 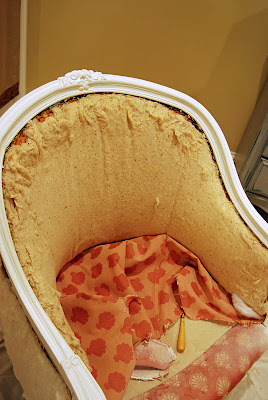 And there you have it.  My progress since I am only using the time that my daughter is at preschool.  Slow and steady wins the race.  Isn't that how the saying goes?  Until tomorrow ladies...

No turning back now!

You may be thinking, where  I have been (or not)?  To be honest.  For the past week, I have been utterly lazy.  I haven't had the desire to do much of anything.  I take that back, I did do a little getting my booth ready for the holidays.  Nothing like taking a jump to get yourself out of a lazy slump. 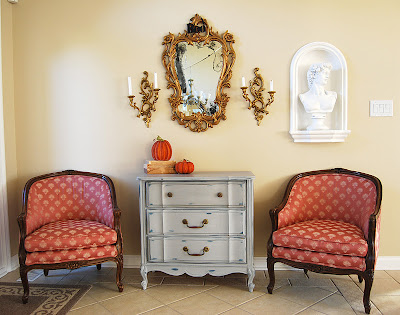 I think the consensus was to paint the wood white and proceed with upholstering with a drop cloth.  Today I decided to get the process started.  First thing I did was pulled off the cording.  I have learned from past projects that you really want to be careful not to pull the cording too hard and rip the fabric since I needed to use the fabric for a template when I go to upholster it.

Once the cording was off, I needed to paint.  I sanded the frame and spray painted the primer.  I love how fast this went.  I followed it up with two coats of a satin white latex.  So, here they are at the point where I now can't turn back.  Nothing like spray paint on fabric to make you want to actually get the project done instead of letting them sit and sit and sit. 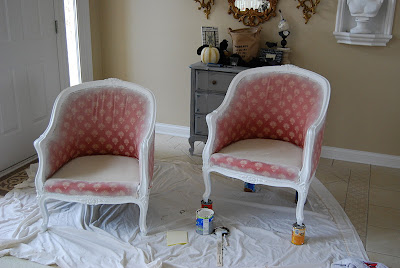 Now that I have shared my first step, perhaps this will hold me accountable to make progress on a daily basis.  I may give the chairs a gray wash to tone down the white.  What do you think?

I'll be back tomorrow to share whatever progress, big or small, that I make.  Hope you'll stay tuned.

I opened my mailbox Saturday and my order of chalk paint had arrived.  I had been eagerly awaiting its arrival.  I had this little french chest I purchased off of Craig's list. 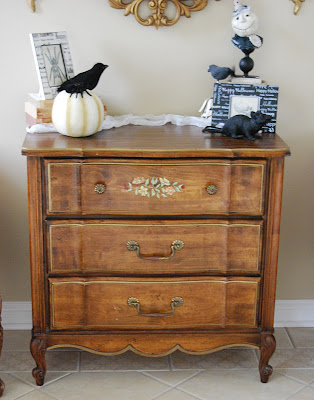 It is a chest of laminated pressed wood loveliness.  I knew that since chalk paint is supposed to stick to any thing, I wanted to put it to the test.  My goal of course was to make it look like an old piece.  I did two coats of Aubusson blue under a coat of Paris Grey.  I have to say the Aubusson blue was shocking for me.  The color is different in real life than on my computer screen.  I was much happier once the Paris Grey went on.  Okay, I will be honest.  I have an extremely hard time with change.  So, painting the piece other than a white kinda makes me twitch.  I have commit issues what can I say?!  Enough blah, blah, blahing and on to the reveal. 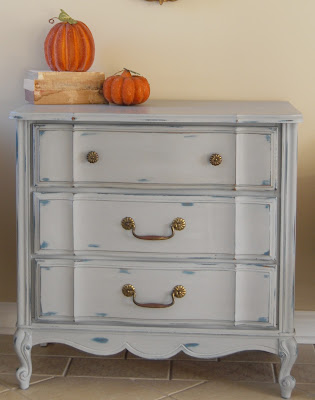 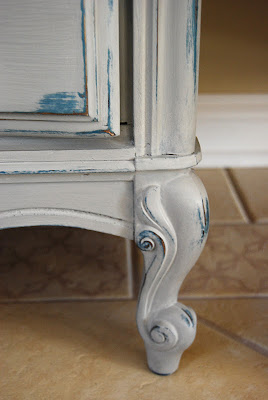 I don't care for the existing knobs and handles but replacing them seems like it could be challenging and cost money.  Before I go, I wanted to share where it is currently residing. Some of you that have follow me, might recognize those chairs.  They are next on the project list.  I just need your help.  First, should I paint the chair frames?  Next, I would love a neutral linen but who really wants to pay $35/yd for the good stuff?  Don't get me wrong.  I would love it but just can't seem to justify paying it.  So, what do you think my options should be?  Love to hear your thoughts.  Hoping to working on the chairs after reading your advice.  Ironically, I drafted this post earlier and just saw Miss Mustard Seed post on chairs that are almost identical.  Pop over there to get an idea of what they would look like neutral.
I'm sharing my little french chest over at: 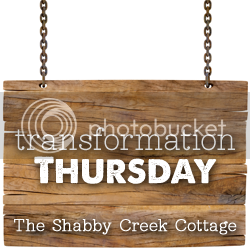